When you are in a position that appears to have you firmly stuck, without many options, the phrase that most likely came to your mind was that you were “stuck between a rock and a hard place.”

Being in a position where you must make a decision, but no matter what decision you make, it will be a painful or difficult one, is how being between a rock and a hard place feels.

It feels lonely there.

Sometimes, it becomes a way of life, especially if you question the status quo or have a creative mind or a wandering or entrepreneurial spirit. For instance, if you are not concerned about being politically correct because you prefer to have your own opinions, you may find yourself between a rock and a hard place if you are offered a much-needed job which might go against your values.

Questioning authority or questioning a culture, or a cultural belief can isolate you in many ways. Trust me. I’ve been to this familiar place and finally resigned myself to the fact that this is the place where I live. Conforming to popular opinions has never been something I was known for.

This was a place I despised and cursed, complained and whined about. Living in this isolated place between hard and challenging decisions can be disheartening to those who are focused on how lonely or hard it is. At a time when most people are retiring and enjoying the fruits of their labors, I found myself rebuilding my life and future after several life challenges including divorce, bankruptcy, foreclosure, and betrayal by many who I had trusted more than I should.

What I learned as I healed, is that I had trusted others to determine my identity and worth and had allowed them to make decisions for me in the false hope that they would care for me as much as I cared for them. The lessons learned in a lifetime are many, and if we allow ourselves to be open to new perceptions, a great deal of the richness of life can and will be redeemed.  The alternative is to regret and grieve for that which we believe we have lost. 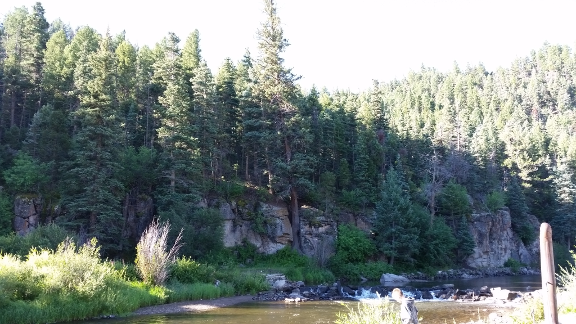 During a season of hating that dreaded place of being in the middle of difficult decisions and desiring to be anywhere but where I was, my oldest son and his wife invited me to come and join them for a fun vacation at an aptly named resort by the name of Fun Valley. Many wonderful memories had been made there with their children and they wanted to include me in their next vacation.

Once again, I found myself not being able to fully participate due to a broken toe, and a vehicle that was quickly falling apart and would be unsafe for the long drive. As luck would have it, my mechanic helped me make arrangements with a rental car, and my son purchased a walking stick for me when we arrived.

As I explored the place, I meditated on the many decisions I needed to make, and when there was a break between fishing and other family activities, I wandered down a trail that a family member had pointed me towards. There, in all of its glory, was the most magnificent tree that I’ve ever seen. Taller than any of the other trees on the mountain, this tree was located at the foot, and was STILL taller than the trees at the top!

Its trunk was thick and its roots twisted and gigantic. My grandson, Jake, was with me on my adventure and started climbing up the roots towards the trunk, which he was not able to reach. As my eyes traveled upwards I was struck with the amazing fact of why this tree was the healthiest tree on the mountain.

Most likely encased in bird excrement, or blown by the wind, a seed had fallen – you guessed it – between the rock and a hard place. All alone, protected from the storms that the other trees endured, this tree grew and grew. Taller and taller, it reached up towards the sky, it’s roots and trunk supported on three sides with solid rock. This solid support had provided the tree with an opportunity to grow, unchallenged, in a way that none of the other trees had benefitted from!

A dear friend of mine is another person who stands out among the rest. Her life has been hard and isolating. Born deaf, her parents did not believe in teaching her sign language, but instead, insisted that she learn how to read lips. Her insights, observational skills, and discernment are unlike most people I have ever met. She has a deep curiosity and an ability to focus in order to read lips of those speaking … and in observing other signals, such as body language and vibrations that others never notice.

She enlightened me regarding her unique positioning by saying, “I’m deaf, but do not belong in the deaf community because I do not sign.  I am deaf and do not belong in the hearing world.” Her rock and a hard place are very real … and her strength, compassion, and wisdom are strong and intuitive.

Not only that, she is a Messianic Jew. Her genetic birth is as a Jew, but because of her faith, she is not accepted among many Jewish people. Among traditional Christians, she is not a part of their community either because she has a deep love for Jewish culture and history that they are curious of, but do not comprehend.

As I watch her interact with people, explore the world around her fearlessly, and ask carefully crafted questions that are succinct and insightful, I am amazed at her strong ‘root system’ and how she stands out among all others because she grew where she was planted. She is an artist too and loves to throw pots on a potter’s wheel, as well as creating mosaics and other works of art that visually speak of what she senses in her heart and spirit. I treasure her friendship and am so grateful for her presence in my life.

I dedicate this blog post to her and give her the gift of a new perception of where she was placed on this planet – just as I was given this gift a summer ago.

No longer cursing my life among hard places, I’m thrilled that life has challenged me and strengthened me. What a rare gift to have been chosen to grow … between a rock and a hard place so that I could grow tall and strong, supported by the challenges of life, gifted by their lessons and wisdom.